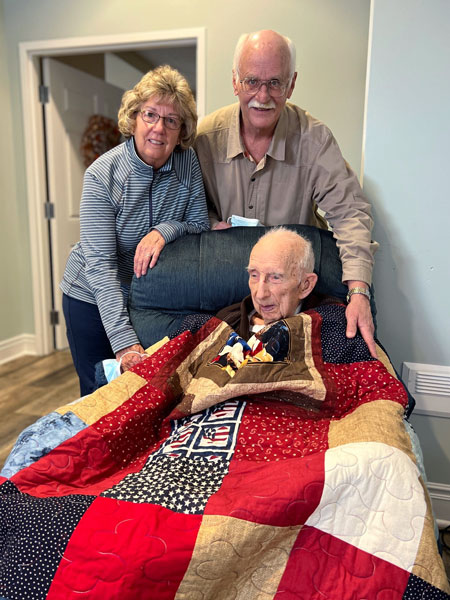 Just in time for Veterans Day…104-year-old Elmer Ulseth was honored for his service in World War II with a Quilt of Valor while many Blue Water Hospice staff looked on. “It is such an honor to be a part of and witness these ceremonies, it truly touches my heart,” said Jessica Martin, Blue Water Hospice Home director. Elmer’s daughter and son-in-law, Janice and David Whipple, were able to witness the heart-warming event presented by Lynn Lebeck, Michigan State Coordinator of the Quilt of Valor Foundation.

Elmer served in the U.S. Army during WWII. While he moved posts several times, most of his military career was in Panama as a Bofors 40mm anti-aircraft gunner. Elmer felt the need to serve his country and he did so proudly.

At the age of 104, Elmer has lived a wonderful life. He has always lived with passion, whether it be winning championships, building a house, constructing boats, or winning big in Vegas – he loves life!

While a young man growing up in Detroit, he was the Mackenzie High School hockey team goalie. In those days you had to be tough…no face masks and very little padding! In 1934, the team won the Detroit City High School Championship title, thanks to Elmer’s skills. His love of hockey continued throughout his life. His son-in-law, David, said “Pa has always been a quiet, soft-spoken man…until at a hockey game”! Janice added, with a laugh, “yes, Dad definitely had some opinions at the games”.

While at a skating rink he met Marie, the love of his life. The two were married June 6, 1947, and enjoyed each other’s company for more than 73 years. Together, they raised three wonderful daughters, Karlene, Verna, and Janice, in the home Elmer built in Redford Township. The handmade two-story brick structure was their homestead for more than 30 years.

Elmer had a passion for boats. He built three boats – 14 ft, 17 ft, and 21 ft vessels. Later, he and Marie purchased a 24-foot Sea Ray and fulfilled a dream of cruising the Great Lakes. They took the boat everywhere…Lake Michigan, Lake Superior, they even went all the way to Houghton/Hancock.

The couple’s love for boating brought them to the Blue Water Area. Docking their boat in St. Clair, they spent nearly every weekend on it. Once they retired in 1979, they made the move to Marysville where they lived for 40 years. About a year ago, they moved to Mercy Village until Marie became ill and passed on January 6, 2021. Elmer continued to live in the apartment independently until just last month. He is now at the Blue Water Hospice Home, and in the same room Marie was in, back in January. Elmer spent many hours in this room…at the side of his wife…the love of his life.

“Pa has always been a gentleman and a gentle man” said David.

On this Veterans Day we celebrate, honor, and thank Elmer Ulseth and all of those who have served our country.

Quilt of Valor is a foundation started by a military mom. The mission is to cover service members and veterans touched by war with comforting and healing Quilts of Valor. Learn more at www.qovf.org.